How often are we exposed to viruses, directly or indirectly? Can anybody count that? Not really. But does that mean we are not getting in the viral cloud? Off coursenot !!

Questions like these can make one sit on the couch to read what's coming on the trendy topics; this article, at this moment, presents a basket of information related to one such virus. Let's solve the puzzle down below !!

What is the Human immunodeficiency virus?

As you all must have heard that HIV is the abbreviation of the Human immunodeficiency virus, a virus that targets the body's immune system. This virus belongs to a group of viruses called retroviruses. The targeted immune cells are white blood T cells and CD4 cells. CD4 is a protein found on these immune cells acting as a helping agent by triggering the body's response to infections or fighting off viruses and other foreign invaders.

HIV is highly infectious, making the host body vulnerable to contagious and life-threatening diseases. The infected person has no defense against the vulnerability, causing an infected organism's bloodstream to become HIV positive. The organism is prone to another condition termed AIDS if not treated well. Acquired immune deficiency syndrome is the last stage of HIV infection, where the body's immune system is completely damaged. Every person with AIDS has HIV, but not every person with HIV will develop AIDS. Both terms are often used interchangeably, leading to confusion about their differences. Therefore it is necessary to differentiate them. The HIV-prone body is considered to have AIDS when the number of CD4 cells falls from the optimum number (500 or 1600) to 200 cells per cm of blood.

This article looks at further aspects related to HIV, the symptoms, stages of infections, its transmission, and precautions.

Do I have HIV SYMPTOMS? How do I know? 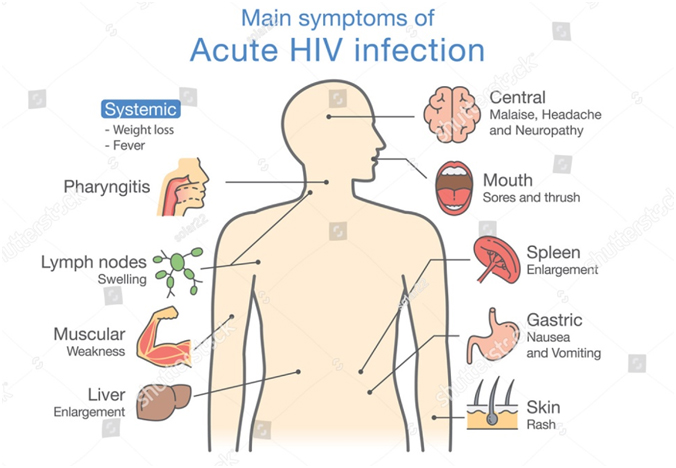 According to U.S. statistics, in 2021, almost 1.2 million people in the United States will be living with HIV. Many may be unaware of being infected due to hidden symptoms. Researchers estimate that nearly 1 in 8 people with HIV do not know they have it. Where's CDC, 2019 National HIV Surveillance System reported on May 27, 2021that, the HIV incidence declined 8% from 2015 to 2019. HIV progressively weakens the immune system, leading to various infections. The symptoms vary from person to person with the duration of the disease. The condition progresses in three stages with different signs, some appearing in one patient in the initial stage and others appearing later in another patient. Some people have no symptoms during the initial period —despite the virus replicating —which can last for several years.

The initial stage shows influenza-like symptoms, including fever, cough, headache, rash, sore throat, night sweats, muscle aches, diarrhea, and weight loss. These symptoms last for one week or two. Mouth sores may be the first sign of HIV or can occur in a later stage. Once unnoticed, the symptoms can progress to tuberculosis (T.B.), meningitis, and cancers. The early stage, termed acute retroviral syndrome, appears 2 to 6 weeks after an individual gets infected with the virus.

Early testing from a nearby healthcare center is advisable, or getting tested at home with a self-kit. Early testing is beneficial for safety from progression to later stages.

The untreated HIV leads to a chronic phase, where it continues to destroy CD4 cells without active symptoms. Sometimes the individual doesn't realize that they are infecting others around. This stage is termed the clinical Latency stage.Doing a blood test can indeed make a count of the infected CD cells. Self-testing is an excellent precautionary measure to avoid further destruction of the immune system, which will be explained later.

If the infected person faces a drop of CD4 cells below 200, the person is diagnosed with Acquired Immunodeficiency Syndrome(AIDS), the advanced stage of HIV infection. Symptoms include a fever that lasts more than ten days, purplish spots on the skin, shortness of breath, yeast infection in the mouth, throat, or vagina, and bruises with bleeding. Neurological symptoms that follow up include memory problems, confusion, losing balance, and seizures. Being with HIV, taking quick treatment and medications can save a life from AIDS and death.

HIV is not transmitted through direct contact with kissing, hugging, sweat, tears, saliva, or by sharing personal objects.

How is HIV transmitted?

HIV is not transmitted through direct contact with kissing, hugging, sweat, tears, saliva, or by sharing personal objects.

Accurate knowledge of HIV transmission can prevent the spreading of misinformation and infection. Other fun facts related to transmission and protection against HIV will be discussed later in detail.

The topmost preventive measure for getting HIV is getting tested. Other protective factors are :

HIV has a gradual viral load cluttering the immune system. Thereby finding the best treatment that combines tests, medications, and healthy living. If one way fails, the other could rescue.